Standard inheritance, Earl created in the dim distant past, no odd clauses, all legitimate.

(Please let me know if I have got any of the establishing parts wrong.)

Bunty and Charles would both be Hons, but would be known as just Bunty Walls and Charles Walls.

Charles marries, and has a son, Harry.

Charles dies (oh noes!). Then Albert and Bunty die, with no known children. This makes Harry the heir apparent to the Earldom, as even if old Walter did have another son, they would be further down the line than Harry's dad was.

1) Does the courtesy title pass down to the next heir apparent? When Albert died, did his brother Bunty become Viscount Park?

2) As Charlie died before both Albert and Bunty, he never had more than an Hon to his name. Thus, as he was never Viscount Park, does Harry still get to be Viscount Park, or does he have to wait as young Harry Walls until his grandfather passes away? 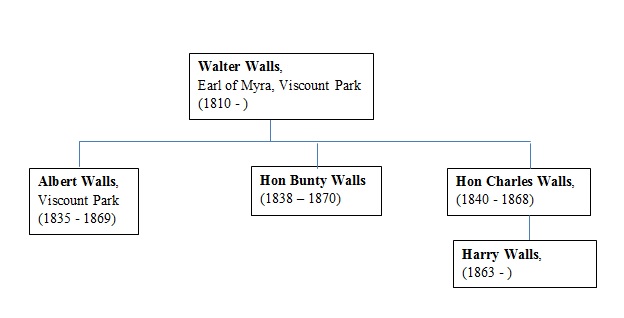 Research done: Laura at Chinet, Jo Beverley, general search on "does the second son inherit the courtesy titles?" and all that led off that...
Collapse